Personnel Hygiene in the Workplace

Personnel hygiene and appearance in the workplace can be a very sensitive issue. Telling an employee, they should consider changing their personal hygiene habits or appearance can be insensitive and rude. In hindsight, ignoring the problem, could create an unpleasant working environment. As a business leader or employee, it can be a very compromising position to be in. But if certain aspects of an employee’s appearance are noticeably distracting others than it’s only appropriate to act.

Personnel Hygiene in the Workplace in Numbers

Per a poll conducted by the Employment office in Australia, 75% of respondents reported finding it difficult to work alongside someone with offensive body odour. 64% also struggled working with a fellow employee who had bad breath. Furthermore, 60% had trouble focusing due to colleagues persistent coughing.

In another survey conducted by CareerBuilder, 23% of hiring and human resource managers believe bad breath affects a prospective employees chance of promotion.

Showerstoyou.co.uk, conducted a survey, which received 932 responses from office workers in range of professions, to find out the biggest personal hygiene and appearance issues they faced in their workplace. 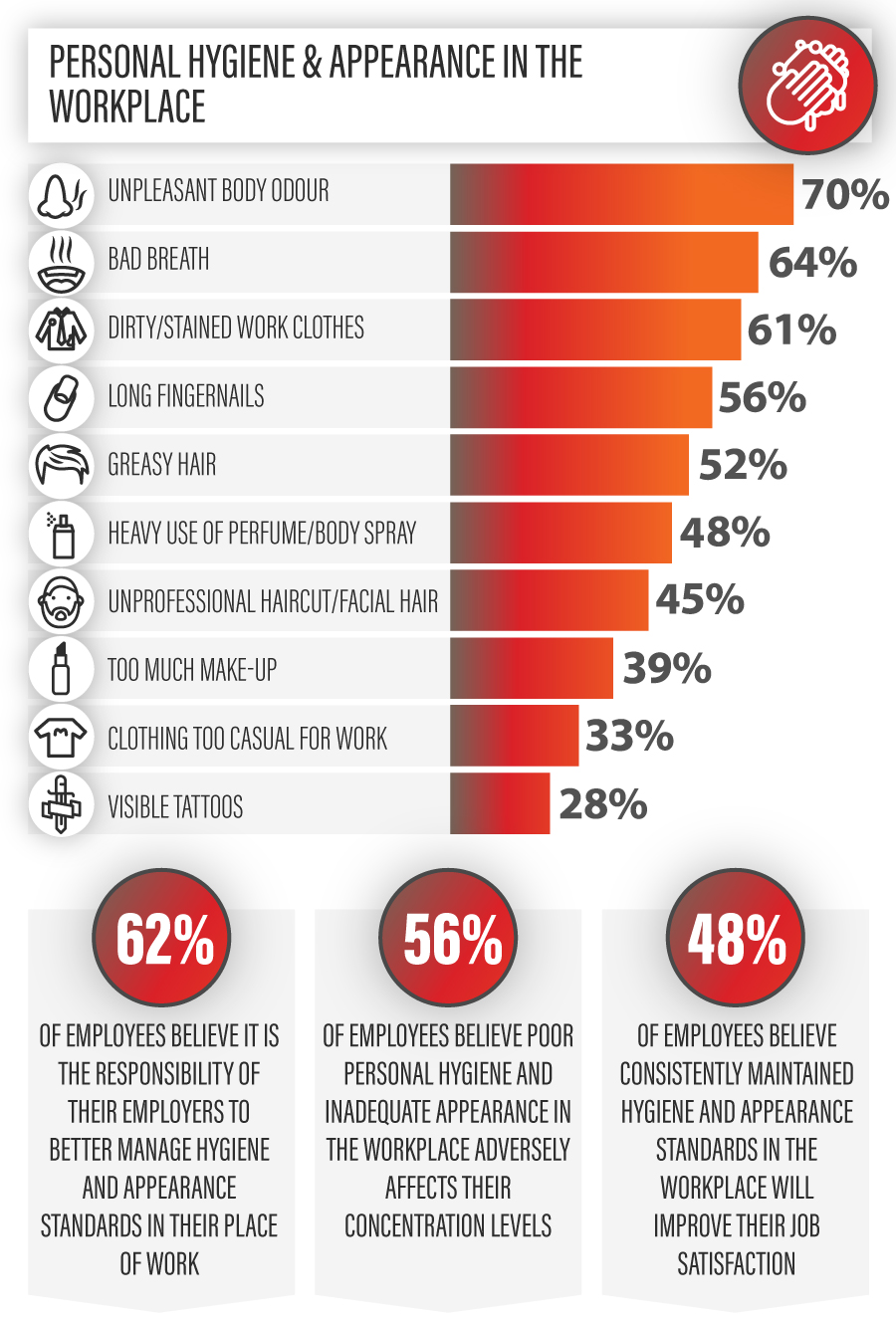 Simon an Information Analyst from London said: “I work in a very fast-paced environment, where the projects and tasks can be very intensive. With multiple clients and deadlines to juggle, a lot of my colleagues like to work long-hours, sometimes even through the night. Unfortunately, it does result to some of them wearing the same dirty clothes over several days and the occurrence of bad body odour. Whilst their dedication is admirable, their lack of hygiene and attention to their appearance can make it very difficult and distracting to work with them”.

Talking Personnel Hygiene and Appearance in the Workplace

Don’t discuss the issue out in the open. Either arrange a private meeting during lunch or after work to politely explain the situation. Be accommodating as possible and try not to seem confrontational.

Express concerns about an employee’s lack of personal hygiene openly and directly. Doing it in such a manner will make things clear and allow them to adequately address the problem.

Try not to use aggressive language. Don’t say something along the lines of “your unpleasant smell is causing a lot of distress to the rest of”. Kindly explain to them how their lack of personnel hygiene is negatively effecting the working environment for everyone else and if they could please take some actions to resolve it.

Whilst there may be an apparent problem with an employee or employee’s personnel hygiene. Speculation and teasing of the situation, will only make matters worse and may even cause the suspect employee to feel distressed. Additionally, it may also harvest an environment of hostilely and conflict. So, to avoid such occurrences, it is important have a handle on the situation.

Preparing for the Unexpected

Off course there is always the scenario where an employee may response in an angry and abusive manner. In such a situation, it’s important to remain clam. Make it clear to the employee that the concern about their personnel hygiene is professional and not a personal criticism.

© Showers to you 2020. All rights reserved.
eCommerce web design by purpose media